If you’re of a certain age (60s+) and income (higher), you may be aware of Medicare’s Income-Related Monthly Adjustment Amount (IRMAA); more likely, you don’t know what I’m talking about.

It’s an acronym that only a federal bureaucrat could love.

IRMAA is an extra premium paid by high income earners for Medicare Parts B and D if their modified adjusted gross income (MAGI) exceeds certain levels. Effectively, it’s an income tax surcharge for those seniors. To complicate it more, it’s based on your tax return from two year’s prior as that’s the most recent information that Medicare has.

The standard Part B premium for most people is $1735 per year ($144.60 per month) and Part D (prescription drugs) premiums vary depending on your plan. The table below shows the additional annual amounts you pay for Part B and D together when facing an IRMAA surcharge: 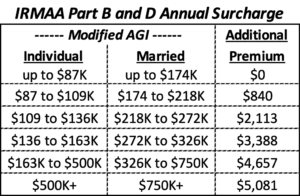 This is, of course, a nice problem to have as it only affects wealthy Medicare beneficiaries; however, if you’re one of them, it pays to be mindful of this “tax” and plan around it. Previously, I explained MAGI and offered some examples about how to raise or lower it, at least in some years.

For the purposes of minimizing IRMAA over your lifetime, you may not want to minimize your MAGI every year. Instead, it may be wiser to increase your MAGI and pay the premium in certain years but avoid it in others, depending if you find yourself just above or below an IRMAA bracket.

What do I mean?

Why might that be sensible? Roth conversions reduce your traditional IRA balance and that will reduce your future required minimum distributions (RMDs). So you may avoid rising into an IRMAA bracket in future years because you reduced your IRA balance now.

If you’re lucky enough to face IRMAA surcharges, be strategic and take a long-term view to minimize them over your lifetime. Also, because of the two-year lag between your tax year and the IRMAA payment, you’ll want to start planning in your early sixties.