GameStop and the Short Squeeze of the Century

Wall Street is the land of aphorisms. One attributed to John Maynard Keynes seems apropos to this GameStop moment:

The market can stay irrational a lot longer than you can stay solvent.

You sell a stock you don’t own, hoping to profit by buying it back later at a lower price. You’re betting that the stock will go down and taking a lot of risk doing so. When you buy a stock, your risk is limited to the amount you’ve paid. You can lose 100% of your investment but nothing more.

When you sell a stock short, your risk is unlimited. At some point, you’ll have to buy back the shares you sold and when you do, you’ll pay the market price at that time. At the moment, GameStop is that existential risk to the short-sellers.

What is a short squeeze?

When short-selling, you have to borrow the shares to deliver to the buyer. In normal times, this is routine as your broker borrows them from another shareholder in return for a small fee you pay and some capital you post as collateral. If the shares continue to rise, you’ll need to post more collateral and may face the dilemma noted by Keynes.

If for whatever reason, there are no more shares available to borrow, you need to buy the shares from someone else to make good on your trade. If there are lots of short-sellers and a shortage of stock to borrow, then prices can spiral upward out of control.

When you either run out of capital to offer as collateral or there are no shares to borrow, you’re in a short squeeze.

They’re a public company whose business is selling computer games in retail stores. If you’re old enough to remember Barnes & Noble, Tower Records, and Blockbuster Video, then you get the idea that GameStop’s peak value has likely come and gone. I don’t know much about video games but I do know that (a) no one is doing much shopping in brick and mortal retail these days and (b) digital downloads and streaming have replaced physical media for all modes of entertainment.

If you think that GameStop is not well-positioned for this new economy then you wouldn’t be alone. Lots of Wall Street professionals came to the same conclusion and shorted GameStop stock. Seemed sensible to me.

The short sellers’ dilemma is summed up by another old Wall Street adage that goes like this:

He who sells what isn’t his’n

Buys it back or goes to prison

Perhaps implicitly knowing that, lots of amateur traders on reddit forums and other social media banded together and started buying GameStop stock. Or, maybe they were just bored from being stuck in their homes, or they just wanted to stick it to The Man. Theories abound. In any case, the short squeeze of the century is now on.

This is GameStop’s stock price over the past year: 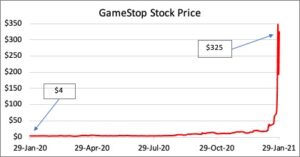 What are my three cents?

How will this end?

The way it always does — badly for most involved. A lucky few will make a killing but the rest will only be wiser for the experience.

Like any game of musical chairs, the music will stop and there will be a rush for the chairs. While the Wall Street short-seller pros may have already lost billions of dollars, the reddit amateurs will be next when they’re unable to cash out their investments during the stampede. Maybe this bubble is different, but I doubt it.

What will be the mechanism that triggers the reversal? No one knows, but one could imagine any of several scenarios unfolding:

Some combination of greed and fear could burst the bubble and however it happens, I’d guess the stock price would eventually return to roughly where it was when the lunacy began.

Trees don’t grow to the sky and nor will GameStop. But as a cultural phenomenon, watching a few hedge fund Goliaths take it on the chin from the little Davids is a nice diversion from trying to reserve a COVID vaccination spot.